... and thousands of small ones! The castle is enthroned on a hill above the River Wupper. The site was tailor-made for a secure seat of mediaeval Baronial power.

Work on the castle started around 1130 and from then on the Dukes of Berg lived here for several centuries, all the while constantly enlarging their sphere of influence. By the end of the fifteenth century their successors ruled over huge areas of what is now North Rhine Westphalia! Later they moved their seat of power to Düsseldorf and Burg Castle declined in significance. The buildings began to crumble and from the middle of the nineteenth century they were utterly cannibalised. And here begins the second great story. The castle was reconstructed once again thanks to local initiative and financial help. The citizens wanted to restore the symbol of the region! Hence they set up a so-called »Castle Construction Association« and began to collect money. Reconstruction work was mostly completed by 1919. Nowadays  Burg Castle is a popular venue for day trips and a wide variety of cultural activities. 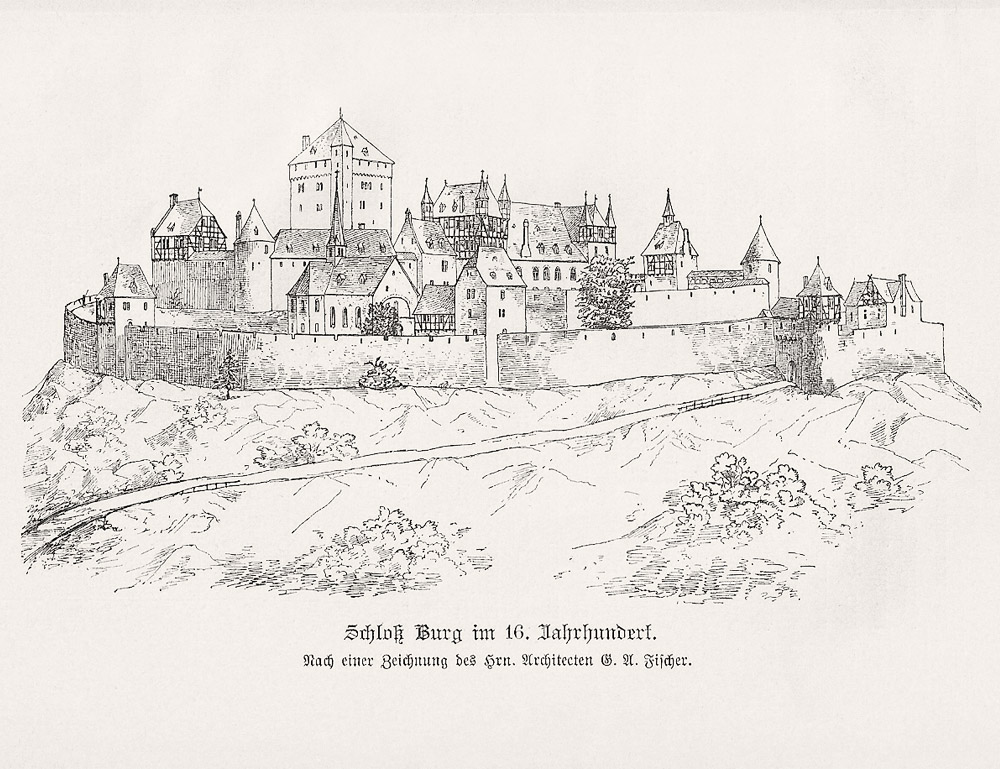 Idealized view of Burg Castle in the 16th century – A Drawing of architect Fischer (about 1892), who was charged with the reconstruction of Burg Castle. (Copyright: Archives of the Schlossbauverein Burg a/d Wupper e.V.) 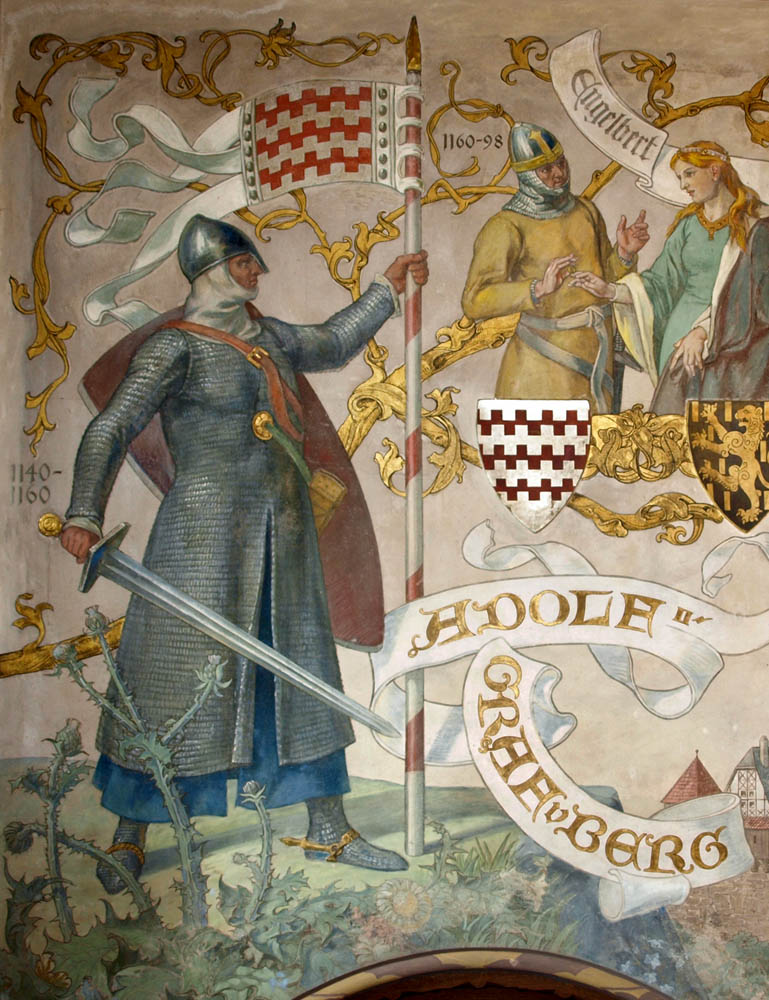 Family seat of the Counts of Berg

1218
Adolf III. dies during the 5th Crusade in Egypt. His brother Engelbert, Archbishop of Cologne takes over the County of Berg – seemingly illegally. As Engelbert II., Count of Berg and Archbishop he exerts considerable political influence at the court of Kaiser Friedrich II. He extends Neuenberge Fortress and converts it into a major courtly seat for representative ends. It now includes a Great Hall with a Knights Hall, a bower (living chamber)and a castle chapel, double walls, towers and gates. In 1225 he is murdered in an ambush organised by his nephew, Friedrich von Isenburg.

1225 on
Since Duke Engelbert II. has no male successors Heinrich von Limburg, who is married to Engelbert’s niece Irmgard, becomes the next Count of Berg. As a result the twin tailed Limburg Lion becomes the new heraldic animal in the Bergisch coat of arms.

1288
The Battle of Worringen, the largest mediaeval battle in north-west Europe. Count Adolf V. of Berg is one of the victors in the battle. He is given the privilege of imprisoning the most important loser, the Archbishop of Cologne, in Neuenberge Fortress. Shortly afterwards he sets up Düsseldorf on the Rhine.

1348
Due to a lack of successors the territory of Berg is handed over to the Counts of the house of Jülich. 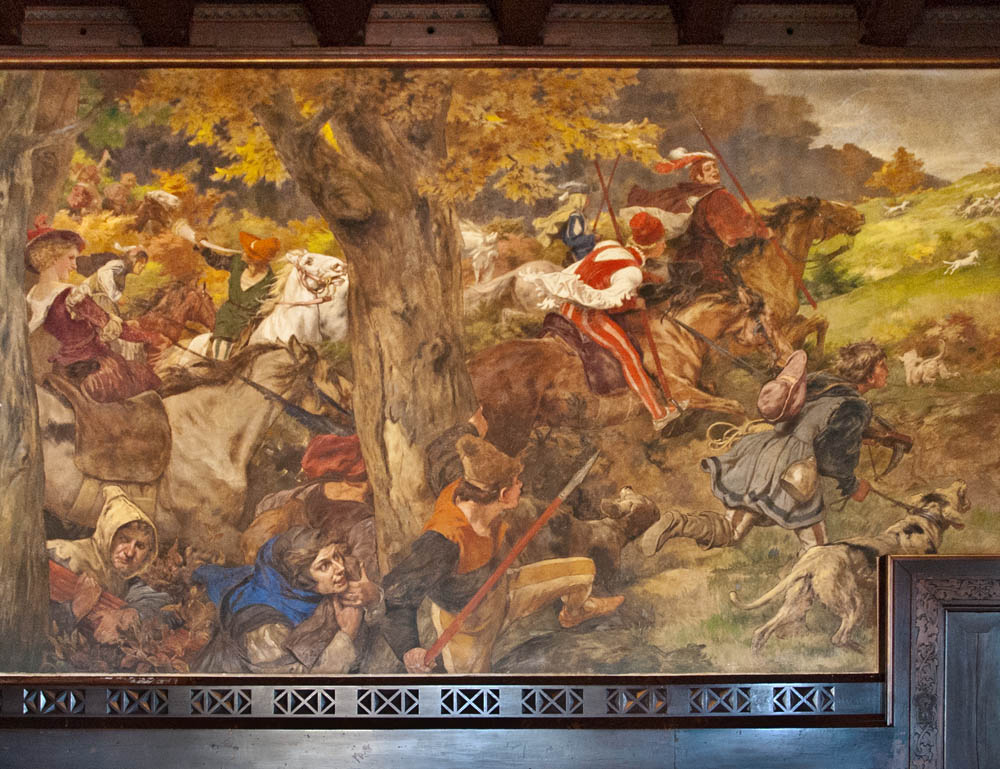 Usage as a hunting lodge and for courtly festivities

1380 on
Following the introduction of new war techniques fortresses become useless for defence purposes. After the Counts of Jülich-Berg are raised to the status of Dukes in 1380, Düsseldorf becomes the new royal seat of the Duchy of Berg. In 1408 the last ruler to reside in Neuenberge Fortress dies.

1485 on
During the fourteenth and fifteenth century Neuenberge Fortress is used for important festivities and as a hunting lodge. As a result it is gradually converted and extended into a site for courtly festivities. Thus the fortress becomes a castle.

1496
Child betrothal at Schloss Burg Castle: the five-year-old Maria von Jülich-Berg is promised to the six-year-old Johann von Kleve-Mark. In 1521 the United Duchies are created from the merger of the houses of Jülich-Berg and Kleve-Mark. They cover broad parts of today’s North Rhine Westphalia.

1526
The hand of Sibylle von Jülich-Kleve-Berg is promised to the later Prince Johann Friedrich of Saxony at Schloss Burg Castle.

1539
Schloss Burg Castle becomes the widow’s seat of the Duchess’s mother, Maria. Previously Anna von Jülich-Kleve-Berg (Anne of Cleves), who is later to become the fourth wife of Henry VIII of England, also stays for a time in Schloss Burg Castle.

1600 on
Schloss Burg Castle increasingly decreases in significance for the Dukes of Berg. 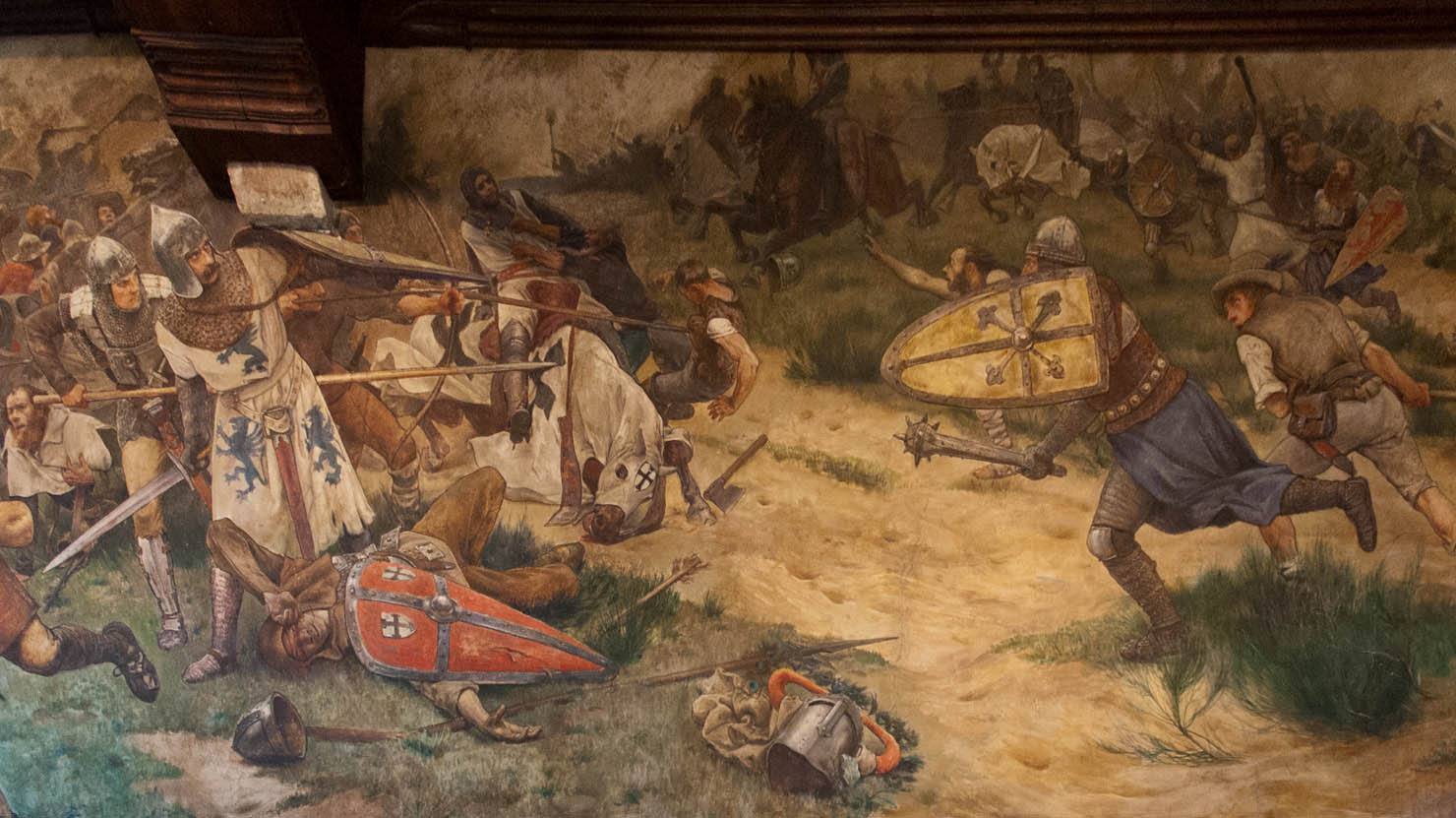 The Battle of Worringen 1288 – The mural paintings in the Knights Hall illustrate important events in the history of Burg Castle. (Copyright: BSW / Christina Schultes) 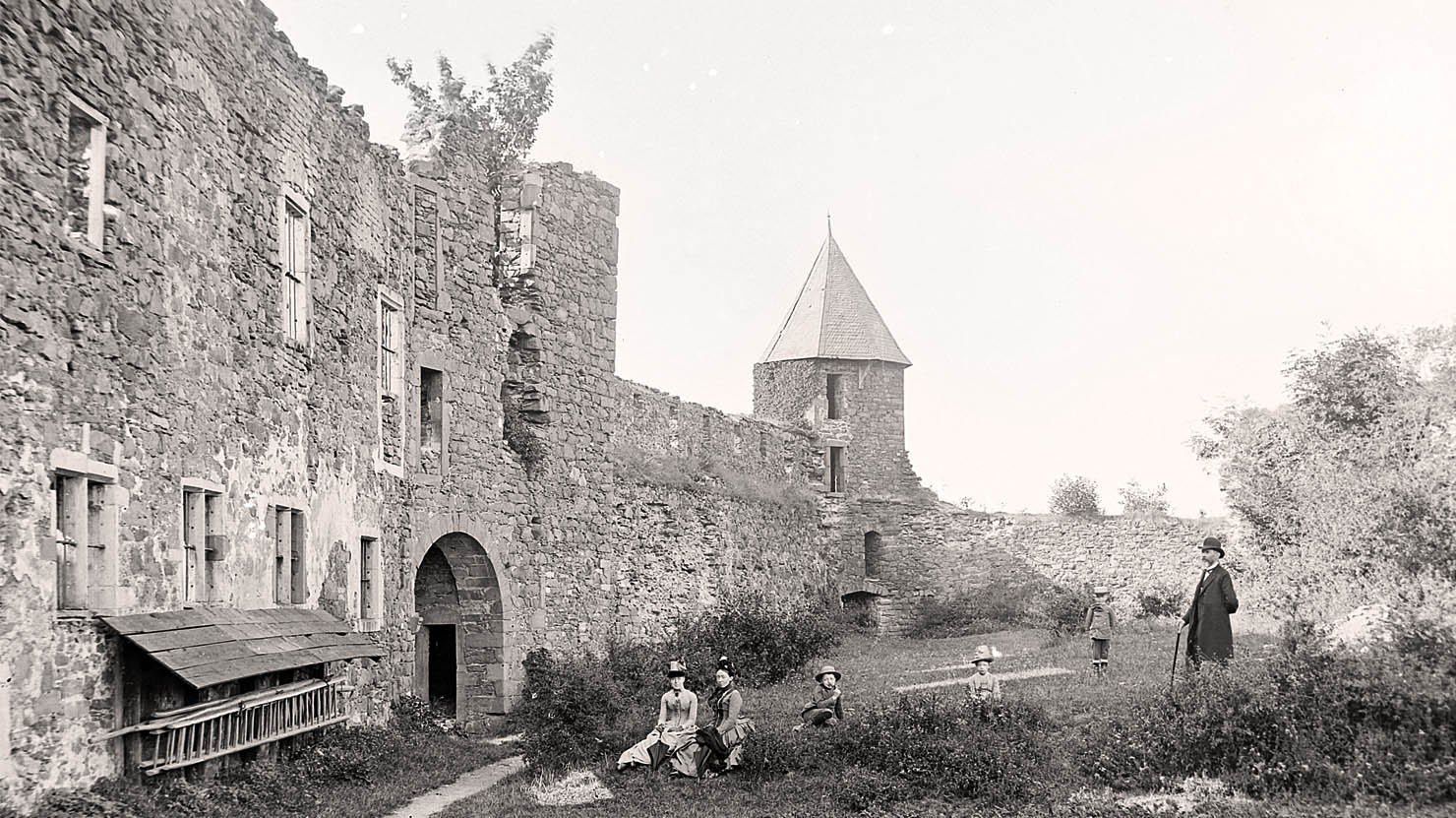 During the 19th century the ruins of Burg Castle were a popular destination – overlooking the Thieves' tower (Diebsturm) and the facade of the Palace (left), before 1887 (Copyright: Archives of the Schlossbauverein Burg a/d Wupper e.V.) 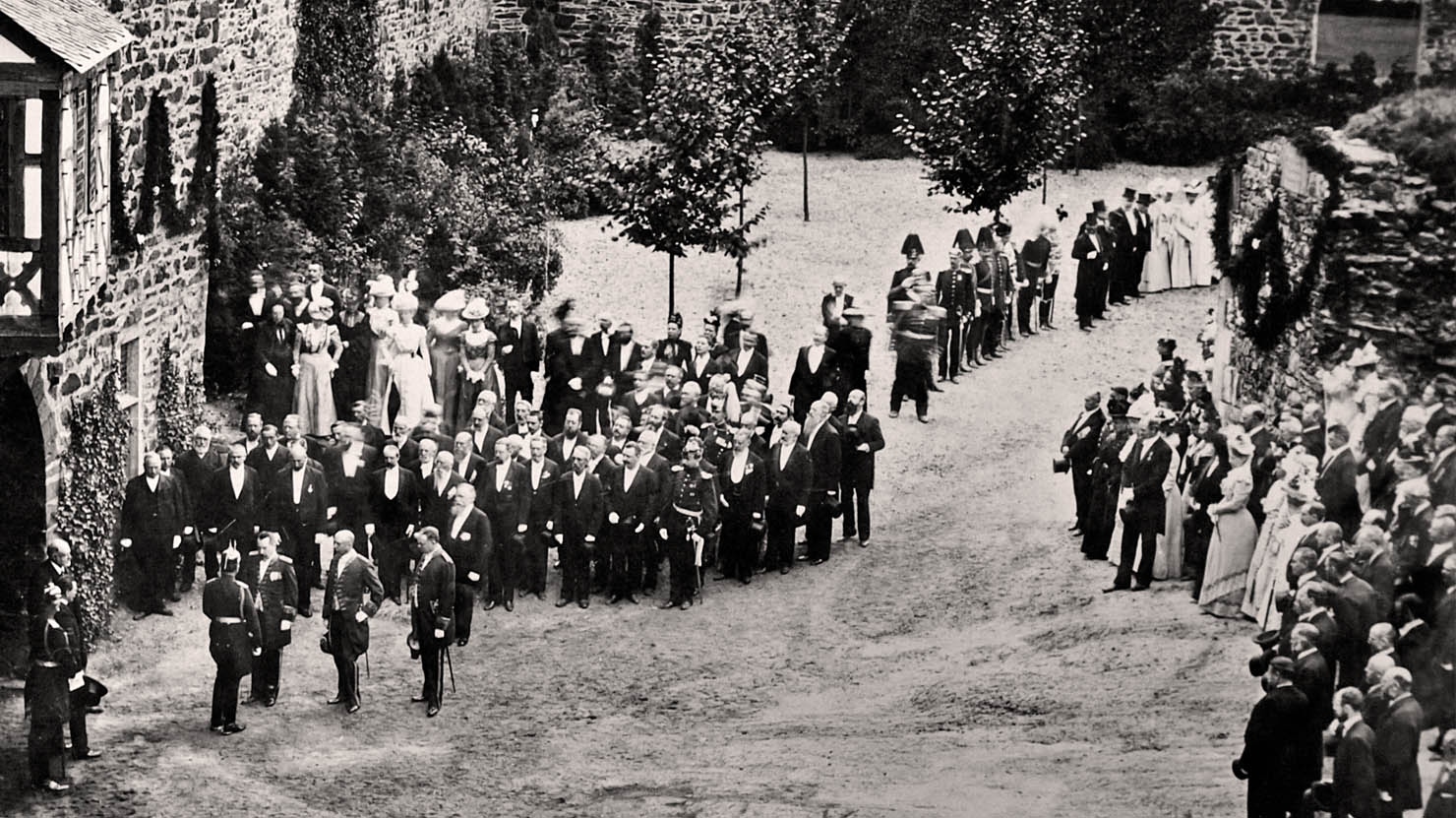 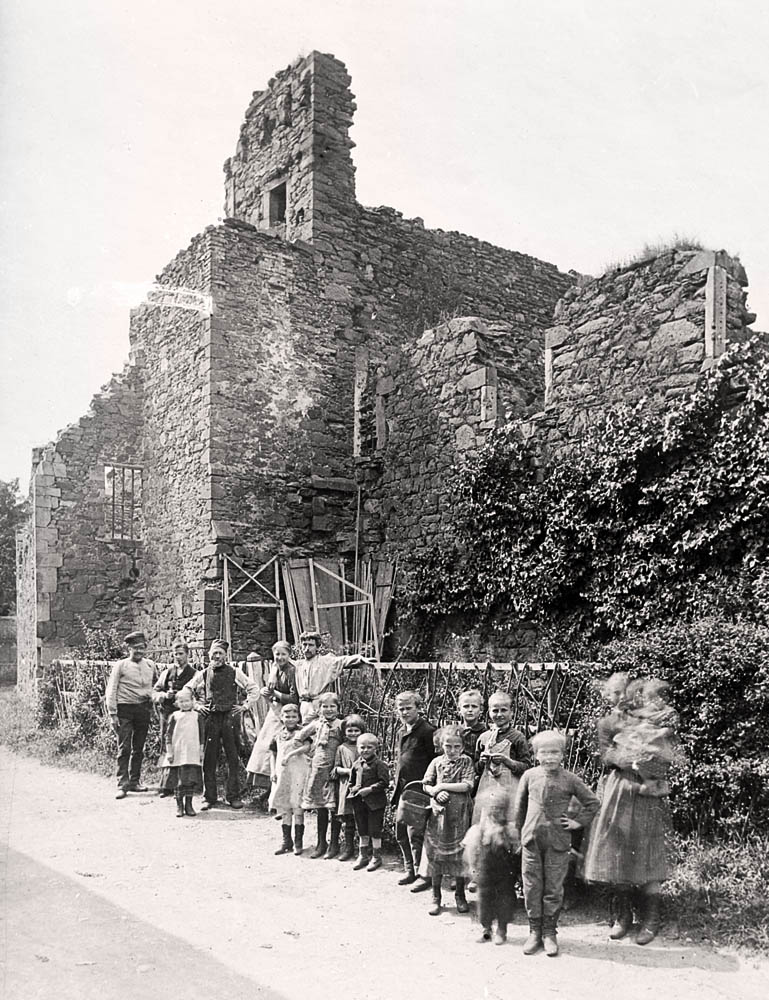 Children enjoyed playing in the ruins – view on the »Zwingertor«, before 1887 (Copyright: Archives of the Schlossbauverein Burg a/d Wupper e.V.)

Further uses until it falls into ruins

1648
When the Imperial troops withdraw at the end of the war they destroy all the defensive parts of the castle, including the walls, gates, and keep. From now on it is used solely as an administrative seat.

1806/1807
The Duchy of Berg falls to the French emperor Napoleon Bonaparte. After the administrative reforms are introduced by Napoleon I. in 1807, the last administrative civil servants are withdrawn from Schloss Burg Castle. Thus the site is deprived of all its administrative functions.

1811
The French administration under the Emperor Napoleon I. attempts to auction off Schloss Burg Castle to the highest bidder. However it can find no buyer.

1815
The Duchy of Berg falls to Prussia and Schloss Burg Castle is handed into Prussian state ownership. Since it has no use for the building it is now used purely for commercial purposes – as a blanket factory, a horse driven mill and a school. 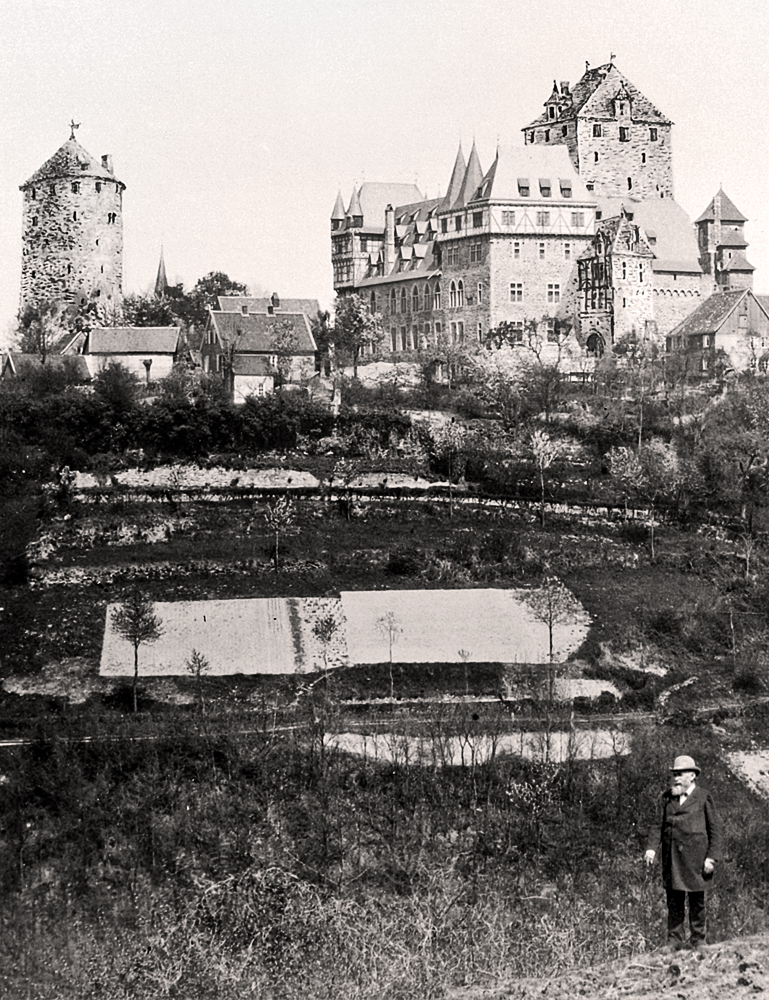 The progress of the reconstruction around 1900 with drawn in keep and artillery tower – bottom right: Julius Schumacher, the founding father of the Castle Construction Association (Copyright: Archives of the Schlossbauverein Burg a/d Wupper e.V.)

1871
Founding of the German Reich

1887
Founding of an association to preserve the castle ruins near Burg on the Wupper – later known as the Castle Construction Association Burg a. d. Wupper. The appeal for the reconstruction put out by the Association leads to a considerable increase in visitors.

1890 on
Reconstruction of Schloss Burg Castle in several stages, mostly financed by donations and lottery money. Clubs and societies in the whole of the Bergisch Land organise special events including concerts and bazaars, the income from which is donated to the reconstruction.

1894
The completion of the Great Hall is followed by the setting up of the Bergisch Museum in Schloss Burg Castle. After a modest start the collection quickly grows as a result of donations and active collecting activities. The Museum is now able to display weapons and armour, paintings, crafts, furniture, coins and printed matter from the Middle Ages and early modern period.

1902
The Castle keep collapses shortly before completion. As a result the architect who is mainly responsible for designing the reconstruction is dismissed.

1919
Most of the essential reconstruction is completed.

1920
A fire in the castle roof almost completely destroys the Bergisch Museum. Work on clearing up the damage lasts until 1923.

1950 on
In the post-war period Schloss Burg Castle develops into a real tourist attraction. Every year up to 300,000 guests visit the castle.

2014
Start of comprehensive restoration measures at the castle.